Oscillators with double function: LIPUS waves transport the active substances through the skin barrier and HiToP® streaming distributes them uniformly. 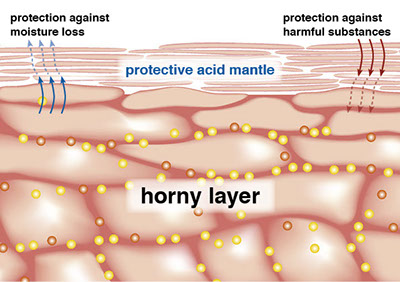 You can visualize this layer like a wall made of bricks and mortar. This basically very useful feature gets in the way if you want to supply the skin with valuable active ingredients.

Therefore, the major objective of any Meso-Therapy is to overcome the skin barrier and to increase its permeability.

Phonophoresis (also: Sonophoresis) is defined as the ultrasound enhanced transport of active substances through the skins barrier. This is a proven method, used on a regular basis in the medical field and well described in the scientific literature (for ex.: The Use of Sonophoresis in the Administration of Drugs Throughout the Skin, J Pharm Pharmaceut Sci 12 (1): 88 - 115, 2009).

The multitude of studies show that the Phonophoresis works but that its efficiency depends strongly on the suitable choice of parameters; i.e. not every ultrasound that is good for ultrasound treatment is also good for Phonophoresis.

The SKINeo® LIPUS matrix was designed for an optimal Phonophoresis.

LIPUS (Low Intensity Pulsed Ultrasound) is a very special type of ultrasound that is well established in the medical field. Compared to classical ultrasound it has very clear advantages for our application.

While the therapist has to continuously move the classical ultrasound head over the skin’s surface in order not to generate harmful hotspots, the LIPUS oscillators can be applied over a long time on the same spot.

With this you gain a high level of safety because a malpractice is impossible and you reach a higher quality of treatment because the device is always applied with the same, predefined intensity. The LIPUS waves open the transport paths through the skin’s barrier and transport the active substances into the skin.

Every oscillator of the SKINeo® applicators is a small technical miracle because it houses the micro-electronics including the necessary software of a small ultrasound unit. Via the small, slightly recessed area of the oscillator the LIPUS waves are being emitted.

The HiToP® streaming distributes the active ingredients uniformly in the skin.

A well-known and commonly used method to transport active ingredients is the iontophoresis. Electrically charged particles or molecules are transported by DC current (“Battery”) from the negative to the positive terminal.  That method works but has strong disadvantages like possible electrolytic decompositions leading to skin irritation or even severe skin burns and potential overdosage.

HiToP Streaming uses the same electric force as iontophoresis but has a completely different approach. HiToP® Streaming has many and very intensive frequencies that generate a so called shaking effect with the electrically charged molecules. In consequence these molecules are distributed uniformly. This was shown in laboratory experiments.

Our gels were developed with this transport method in mind so that they are best transported by HiToP® Streaming.  Now the most important point: HiToP® uses exclusively alternating currents so there is no risk of acid burns! There are no negative side effects. Additionally, an overdosing is not possible because HiToP® Steaming doesn’t transport particles from one terminal to the other like iontophoresis but rather distributes the particles uniformly; you can’t overdo this!

HiToP Streaming acts directly on the active ingredients because they carry the electric charges. It transports these molecules through the skin barrier using the transport paths that have been generated by the Phonophoresis and then distributes them evenly within the skin.